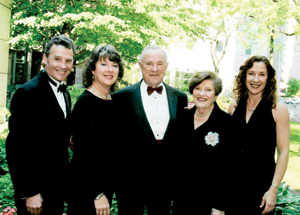 Bob (z”l) and Judy Auritt (z”l) Klein’s three children learned how to give back by watching their parents modeling it all their lives. Bob and Judy, in turn, had learned it from their parents.

“On my father’s parents’ 63rd wedding anniversary, I asked my grandfather what he wanted his legacy to be. He was a very direct person. He simply said, ‘I want all my progeny to be proud Americans and proud Jews, in that order,’” recalled Sally Klein-Katz.

Those values were passed down to the next generation, and are still being passed on today to their children and grandchildren. The dedication and generosity of Bob and Judy to both the Jewish and the greater communities live on, in part, through the Bob and Judy Auritt Klein Legacy Philanthropic Fund.

Despite most of the family moving away from Allentown years ago, the fund continues to benefit the Lehigh Valley Jewish community.

“That’s why they my parents created this endowment fund. They were leaving for Philadelphia, where they were born, but Allentown had been so wonderful to us and instrumental in raising our family. They wanted to leave something here that will represent in some small way how much we have been graced. It was their parting gift when they went back to Philadelphia, which also says a lot to us in terms of not forgetting your roots,” said Anne.

The Kleins set up the fund with the Lehigh Valley Jewish Foundation, and their children were involved in helping to make recommendations for gifts. After the passing of Judy, the Foundation Board decided the legacy should continue. Sally became the contact person for the fund for five years, with a possibility of extending that timeline in the future.

“I would just say one of the things all three of us can probably agree to is that our parents, as people, as philanthropists, have always been so outrageously respected by any organization and any community they’ve been in. As a couple, not just individuals, and that’s always been a source of pride for all of us. When we walk in, there’s nothing better than being ‘Bob and Judy Klein’s daughter.’ It always meant something, and it still does. And I think your legacy lives on through your offspring and through your accomplishments,” said Anne Klein Farber.

It wasn’t just their financial resources but also their time and energy that the Kleins selflessly gave to organizations they believed in.

“Our parents set the example of giving an enormous amount of time in addition to funds,” said Sally.

The family appreciates that while most of their funds do go to Jewish causes, they have the freedom to give to any worthy 501(c)(3) non-profit. This reflects their parents’ involvement in many charitable causes, from their being jointly named volunteers of the year for Penn State University and chairing the Einstein Healthcare Harvest Ball together to Bob’s time as a trustee at Muhlenberg College and Judy’s days spent volunteering with museums or with the League of Women Voters and serving on the Allentown school board, to name just a few.

“I think she was a very strong woman,” said Billy Klein, reminiscing about a time his mother stood up to a heckler at a board meeting.

That strength lives on in Billy, who has been an active volunteer at Congregation Keneseth Israel. It lives on through Sally, who now lives in Israel and has had her children set aside part of their allowance since they were little to give tzedakah in their own name. It lives on through Anne’s work with the American Cancer Society, and her daughter’s own philanthropic projects, already leading at age 25. And it lives on through their fund which continues to impact the local Jewish community and beyond and will continue to do so for years to come.