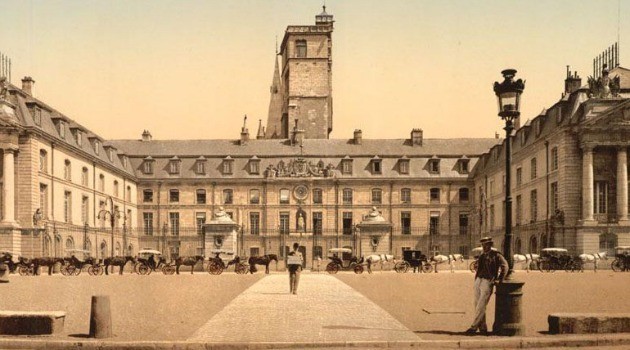 Robert Weiner’s interest in the Jewish community of Dijon, France, was kindled in 1993 when he led a group of Lafayette College students on a semester abroad program. Over the past two decades, he has returned numerous times, immersing himself in the culture and daily life of the region and its Jewish community.

Weiner, who for the past 46 years has been a history professor at Lafayette College as well as the school’s Jewish chaplain and Hillel director (now co-director with Professor Ethan Berkove), recently co-published a book with retired Lafayette professor Richard Sharpless entitled, “An Uncertain Future: Voices of a French Jewish Community, 1940-2012.” He spoke earlier this year at Bnai Abraham Synagogue about the climate for Jews in France and Europe amid escalations of anti-Semitic activity.

Although half of France’s Jews live in Paris, in Dijon, Jewish culture thrives, Weiner said. Françoise Tenenbaum has been the city’s assistant mayor for the past 15 years. Widely respected, she has implemented social welfare programs for many of the area’s underprivileged citizens, including those of Muslim backgrounds. In the summer of 2014 during the conflict in Gaza, a contingent comprised mainly of Muslims marched on Rue de la Liberté – Freedom Street – crying, “Death to Jews, Death to Israel.” “If this can occur in a city with strong social programs led by a respected Jew,” Weiner said, “it can happen anywhere.

In truth, Weiner said he saw the writing on the wall with the Second Intifada in 2000 and the terror attacks on Sept. 11, 2001. “I knew it would get much worse,” he said. “You could feel it; you could smell it.”

He knew it was only a matter of time before something drastic would force France to confront terrorism head-on. The attacks on Charlie Hebdo and the kosher deli confirmed his fear. In the recent past, perpetrators of anti-Semitic acts received soft penalties with little to no jail time. After the torture and murder in 2006 of Ilan Halimi, a French Jew, as well as the Toulouse murders in 2012, stiffer penalties began to be imposed. The Hebdo case, he said, may be a turning point toward substantial change.

“Since the 1990s,” Weiner said, “there have been increased apologies about France’s mistreatment of Jews during WWII.” As president François Hollande said recently, “France without Jews will no longer be France.” Weiner noted that France has a universalist vision of itself wherein every citizen is equally valid and protected by law regardless of race religion, gender or ethnicity. French Jews play a major, invaluable role in all aspects of society, and the fact that so many are leaving for Israel is viewed as a failure. “Where Jews can no longer live,” he said, “others cannot live comfortably afterward.”

If there’s hope to be found, Weiner said it lies in sustained European economic expansion (eco-recovery seems to finally be beginning) combined with an affirmative action program for Muslim youth, who have a 40 percent unemployment rate in France. He points to incidents such as a gathering at a French synagogue after the recent attacks that Muslim Imams attended, as well as a “human chain” by members of Norway’s Muslim community to protect Jews as they entered Sabbath services as sources of optimism. But this must be combined with more awareness of the threat, vigilant monitoring of French Muslims who travel to Syria to engage in Jihad then return to France and greater punishment for hate crimes.

Each year since 1975, Weiner has led an interfaith seder at Lafayette’s Hillel, whose events are multi-cultural and interfaith. It’s a well-attended, popular event and participants include some Muslim faculty and students. At this year’s seder, Weiner said he will talk about the world’s hot spots and try to find an opportunity for personal and communal growth. “As Jews we must take risks,” said Weiner. “We must show love and be open to others. But we must also be prepared for harsh realities. We’re fortunate that we live in the United States, and that there is a strong, beautiful state of Israel.