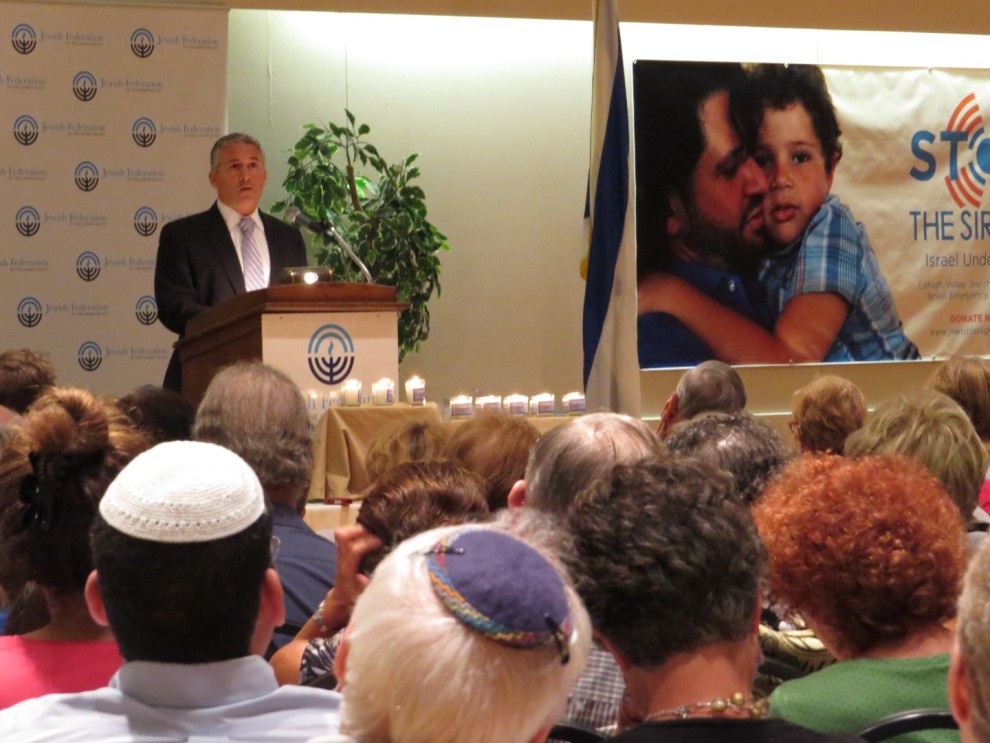 The auditorium at the Jewish Community Center of Allentown was packed on July 22 as more than 400 people turned out for a gathering in support of Israel.

“Unlike festive Yom Haatzmaut gatherings and programs which have occurred this past year, this is a time of solidarity, not celebration. Whenever precious human lives are lost – whoever they are and wherever they live – we do not celebrate,” said Mark L. Goldstein, executive director of the Jewish Federation of the Lehigh Valley. “Israel acts in self defense seeking to hit terrorist targets, Hamas rocket warehouses and tunnels that enable terrorists to infiltrate into Israel.”

Three weeks prior, more than 300 people turned out for a memorial service for three Yeshiva students abducted and killed in the West Bank.

Even before the kidnappings, rockets were raining down in Israel from Hamas and after a diplomatic outreach by Prime Minister Netanyahu was answered by 100 rockets, the Israel Defense Forces launched Operation Protective Edge.

Over the past several weeks, more than six million people – 75 percent of the Israeli population—have endured endless sirens and felt the terror that goes along with them. Like other Jewish communities, the Lehigh Valley is standing up to support our brothers and sisters in every way.

Days after the escalation, three Jewish Federation leaders touched down at Ben Gurion Airport. Their trip was planned before the conflict, but not going was not an option. “I will not let fear dictate my actions,” said Iris Epstein.

The first stop for the delegation was Yoav, the Lehigh Valley’s sister community in south central Israel, well within rocket range. “Yoav is our family in Israel. They’re us,” said Judy Diamondstein, assistant executive director of the Federation, who accompanied Epstein and Vicki Glaser on the trip.

Many Lehigh Valley residents were in Israel during the conflict. Debrosha McCants wishes she was one of them.

Her daughter Katie was called up from IDF reserves at the beginning of the conflict to serve in her second Israeli war.

“This time feels different to me. It escalated faster and seems more intense,” McCants said. “I wish I was in Israel with Kate to give her the family support that most Israeli soldiers enjoy, especially in times of war.”

Another Lehigh Valley lone soldier, who asked that her name not be printed for security reasons, found time to reflect on the current conflict.

“What I find extraordinary, despite the current situation, is that Israel continues to coordinate ambulances to come in from Gaza to the hospitals in Israel ... And believe it or not, we still export goods into the Gaza Strip. Both of the crossings from Israel to Gaza, Erez and Kerem Shalom Crossings, still remain open.”

Israelis in the Lehigh Valley

Four teens from Yoav aren’t there to experience the rocket fire with their families – they’re working at Camp JCC and staying with local families for the summer.

“The people we’re staying with know we have family there and they might have families there so they know about the situation and they ask a lot of questions,” one of the teens, Noa, said.

“This community is very warm,” said another teen, Aviv.

Sapir Lev, 22, from Haifa, is also working at camp. “Being the representative of Israel in Allentown, I feel really proud to do that because people ask me questions ... I tell them how it feels to be a child their
age in Israel ... Kids are not going to summer camps in some places in Israel because summer camps were canceled because of the rockets.”

What our community is doing

Trauma counseling. Safer shelters. Respite for children. The needs of the people of Israel were estimated to be $5 million in the first week alone, and those needs won’t go away when this conflict ends.

Joining with Jewish communities across North America, the Lehigh Valley Jewish community has launched the Israel Emergency Campaign in response. All of the Valley’s synagogues are on board. One hundred percent of the money raised is going directly to emergency needs.

Less than a week after launching the campaign, $60,000 was transferred from the Lehigh Valley to Israel, including $20,000 to rehabilitate shelters in Yoav. More than $100,000 has been raised to date. We will continue to provide help wherever it is needed.