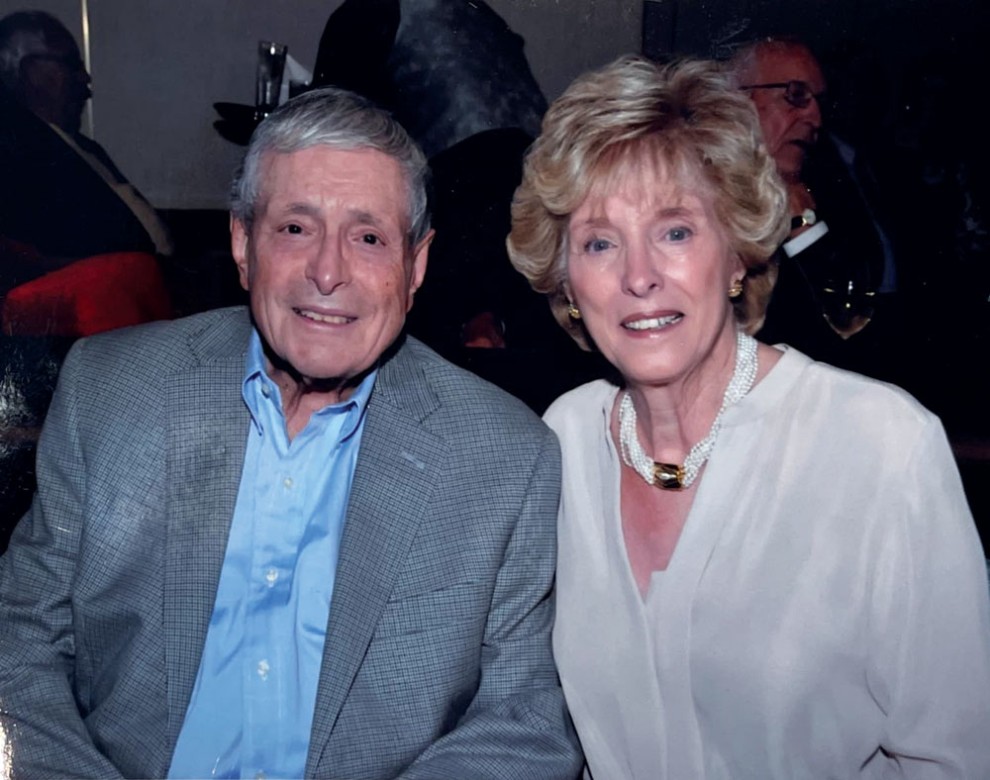 Irwin and Ellen Schneider may have recently made the transition from snowbirds to permanent Florida residents, but they have left a big piece of their hearts behind in the Lehigh Valley. That’s where Irwin moved almost 90 years ago at just six months old from Brooklyn, New York, and spent his life “surrounded by the Jewish institutions in the community” – Temple Beth El, the Jewish Community Center, the Jewish youth groups and Camp Pinemere.

He met Ellen, who was from a smaller town in Central Pennsylvania with a much smaller Jewish community, while she was still in college, but he had been drafted into the army. So after he got out of the military and entered the family business, they were wed in January 1956. This month, they will have been married for 66 “wonderful” years. And throughout those years, they were “very, very involved” in the Jewish community.

Irwin looks back upon his years in the Lehigh Valley with great fondness and cherishes the friendships he made, some of which have lasted a lifetime. From those experiences at a young age, he developed an appreciation for how much the Jewish institutions enhance the lives of Jewish people of the community. He began supporting the Jewish institutions as soon as he established his own home and family, remembering how much they enriched his life growing up.

“I wanted to make sure these institutions remained vibrant for the next generations coming up,” he said.

When he sold his business in 1987 and retired and had the time available to him, he began to devote himself to serving on the boards of Temple Beth El, the temple Endowment Fund board and its investment committee, the Jewish Family Service as its Treasurer during the time of the Russian resettlement here in the Lehigh Valley, and the board of the Jewish Federation.

As for Ellen, “I began volunteering my time and talents early on in my marriage with the Jewish Community Center,” she recalled. “I rose through the ranks of the Women's Auxiliary to the Presidency for four years in the late 1960's and early 1970's. During those years of service during my Presidency we initiated a number of innovative programs including Camp Shalom, a day camp for inner-city children in the Allentown area at the JCC campsite for which the Allentown JCC won a national award. We also began the Nearly New sale which has raised a great deal of money throughout the years for the benefit of the JCC. I also served on the board of the JCC for 12 years.”

When her term as President ended, she picked up the threads of an interrupted college education and completed a degree in social work at Cedar Crest College and was asked to join the professional staff of the JCC as Director of Senior Activities.

“I ran various inventive programs with the Friendship Circle for 15 years. Those programs included trips, luncheons, an additional day of programs with discussion groups featuring community leaders, a Morning Call reporter, school groups, book reviews utilizing the staff of the Allentown Public Library as well as board and card games,” said Ellen.

In the early 1990's when the time came for the Schneiders to retire and spend the majority of each year in Florida, they reluctantly gave up their board positions and Ellen gave up her job. However, “our years of service with the Jewish community have been an important part of our lives, and we both look back upon those years with pride,” Ellen shared.

Their hopes for the future of the Lehigh Valley Jewish community are for others to have a chance to share experiences similar to those they did here.

“We would hope to see that the Jewish institutions that at present are vibrant remain so for upcoming generations. The Lehigh Valley has changed; the people who are coming in rarely have family connections here anymore. They choose to be here, and one of the reasons they choose to live here as opposed to some other place is because of the Jewish institutions, and we recognize that, and we want to see that continue. And the way to do it is to get them involved as Irwin and I did in our younger years, get them involved in organizations, and most importantly, have them support them both with their service and financially,” said Ellen.

Irwin added, “Even though we will be living in Florida full-time, we still want to be financially committed to Temple Beth El and Federation and JDS on an annual basis.”

Their devotion to their hometown is evident by how much of themselves they continue to give after decades of service.

“The Schneiders are the kind of people we treasure in our community, and we are grateful for all they have done here in the Lehigh Valley. Florida is certainly lucky to have them participating in their community there,” said Federation Executive Director Jeri Zimmerman.