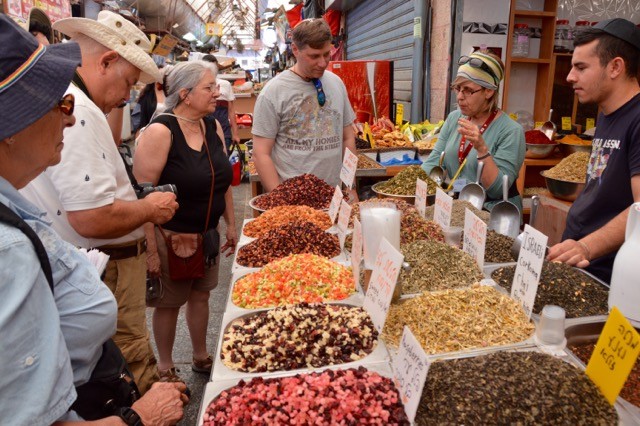 By Casey Goldblat
Special to HAKOL

On the morning of July 15, our group of eight from Brith Sholom landed in Israel. We hit the ground running and didn’t stop for the next 11 days. The focus of our trip was food, and we not only tasted it, but we also pre¬pared it, saw how it was grown and learned about respecting natural resources. We also learned about the people of each place we visited and ate the culinary delights they brought to Israel from the many different cultures that they represented. These tastes are now considered to be part of the fabric of the land.

I could go on about the wonderful foods we had, the Kurdish, Moroccan, Israeli (using ingredients native to Israel) and Yemenite cuisines we sampled. I could also talk about shuk tasting, falafel, wine tasting, chocolate making (yummy), the steak house, the pomegranates, the olive oil and the burgers. But, instead, let me focus on some very special experiences on this trip.

We went to Meir Panim - a free restaurant. Here we helped prepare food (we peeled many, many carrots) for those that needed food. It not only served those that did not have enough money to buy food, but also those that were in need of emotional and social support. The workers ask no questions of the clients except “Did you have enough?”

We picked beets for Leket Israel, a National Food Bank. As our band of eight began working, we were soon joined by a larger group of Israeli soldiers. We worked hand in hand with these young men and women, and we heard their stories and their future dreams as we worked together. Just before our time was over, a group of Greek children came to join the ranks of workers. It was a joy to see people coming together to help others.

The salad trail was an exceptionally interesting place. We were in the Negev, where it was dry, hot and sandy, yet we went into greenhouses filled with strawberries, tomatoes, peppers, cucumbers, kohlrabi, arugula and many more varieties of vegetables. We had been to Bio-bee earlier in the week, where we learned about how beneficial insects were modified and used for pollination and control of destructive insects. On our salad trail, we saw that these methods for healthy control were in use by real farmers. It was safe to eat right from the plant because there were no insecticides used! Although we had visited a water treatment plant, now we could see that technology being used to keep the Negev green.

We also milked cows, fed calves, braided challah, participated in an archeological dig, slithered through a cave crawl, sloshed through Hezekiah’s water tunnel, walked around the top of the wall surrounding the old city, kayaked on the Jordan River, visited the Israel Museum and the Shrine of the Book, Herodium Park, Maimonides Heritage Center, and did I mention we made our own chocolate treats?

There were many “firsts” for our group. For some, it was their first time in Israel, first time at the Western Wall welcoming Shabbat, or first time on the citypass train system. For me, it was my first time reading Torah on Rosh Hodesh. I got to experience this honor at Robinson’s Arch, the Masorti Kotel. While I chanted my portion, I could hear other groups singing shahaarit and children being joyfully brought to Robinson’s Arch to celebrate a bar or bat mitzvah. The warmth of our group, seven Jews and our Rabbi, surrounded me. I was home.