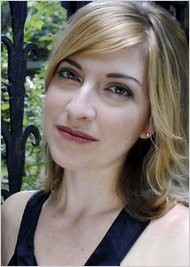 Julie Orringer was raised in a Conservative Jewish household, was bat mitzvahed and attended Camp Ramah.

But when she traveled to Hungary in 2012 to talk about the Hungarian translation of her book, “The Invisible Bridge,” a question from reporters surprised her: When did you first find out you were Jewish?

“Even now, a lot of Hungarian Jews don’t know they’re Jewish,” said Orringer, who will be the featured speaker at the Jewish Federation’s Women’s Division Spring Event on May 18. “It really struck me how incredible it is that we have the freedoms that we have in this country still and that nobody has to live in fear of telling their children that they’re Jewish or practicing their religion here.”

“The Invisible Bridge” is a fictionalized account of her own Hungarian-Jewish grandfather’s story in the years leading up to and during World War II.

The book tells the story of Andras Lévi, an architecture student who arrives in Paris from Budapest in 1937 with a scholarship, a single suitcase and a mysterious letter he has promised to deliver to C. Morgenstern on the rue to Sévigné. As he falls into a complicated relationship with the letter’s recipient, Andras becomes privy to a secret history that alters the course of his life. At the end of Andras’s second summer in Paris, all of Europe erupts in a cataclysm of war.

Since the book was published in 2011, Orringer has spoken in many venues, including many Jewish ones.

“I find that people really connect to the characters’ complicated experience of Judaism in the book and it’s something that was interesting to me as I was writing about it, so I’m always happy to talk about it,” she said.

While researching the book, Orringer came across the story of Herschel Grynszpan, the young Polish-German Jewish boy who, in 1938, walked into the German embassy in Paris and shot a worker there in retaliation for the hardships his family had faced. Grynszpan was one of the first people to be deported from France under the “on-demand clause” of the Franco-German Armistice, she said.

She then went and Googled “on demand” and it turned out to be part of the title of a memoir by Varian Fry, who risked his life to smuggle thousands of refugees out of Vichy, France, and beyond the Gestapo's reach.

A fictionalized account of Fry’s story will be the subject of Orringer’s new novel, “The Flight Portfolio,” which she hopes will be available next year.

In her talk, she will touch on both novels and the challenges that come with writing historical fiction.

Orringer’s previous work includes “How to Breathe Underwater,” a short story collection. She has been the recipient of many prestigious awards and prizes. She lives in Brooklyn with her husband and two children, Jacob, 5, and Lillian, almost 2.

Women who have pledged a minimum of $365 to the 2016 Campaign for Jewish Needs are invited to join the Federation at the Women’s Division Spring Event on Wednesday, May 18, at 6:30 p.m. at Temple Beth El. To learn more or register, click here.