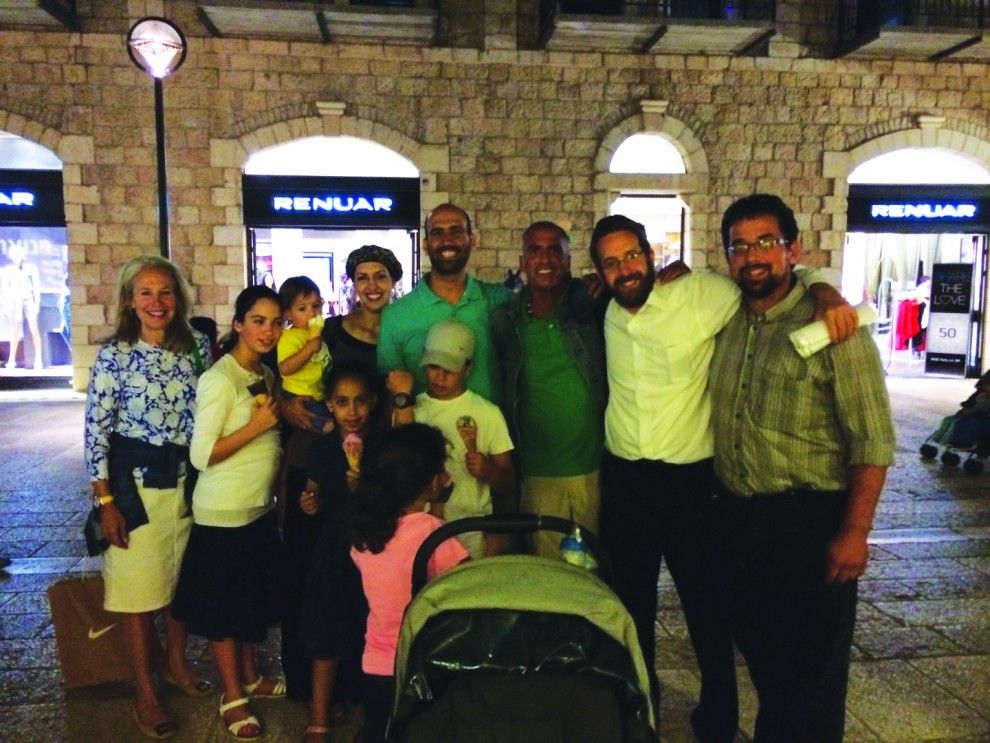 In August, Congregation Sons of Israel’s Rabbi David Wilensky and seven congregants made a spontaneous trip to Israel to show their solidarity. Below are excerpts from two of Rabbi Wilensky’s daily letters to the congregation.

Many Israelis feel that the world is against them, and people coming from outside Israel to visit, specifically to show solidarity, has been very meaningful.

One morning, we paid a shiva call to the family of Hadar Goldin in Kfar Saba (the soldier who was initially thought to have been abducted). While there, the brother of slain Sergeant Turjeman also came to pay a shiva call. I mentioned to him that we spoke about his brother in shul the previous Shabbat; he was deeply touched and wanted me to say thank you to our community for perpetuating the memory of his brother.

We visited injured soldiers in Be’er Sheva and delivered our shul’s hand written letters. One of the soldiers we visited was sitting next to the mother of his comrade who was killed in the same blast that sent this soldier to the hospital. They nearly started crying when we told them that we came from America to wish them well. They specifically wanted me to relate to our whole community that it gave them great chizuk (strength).

We also visited two army bases and delivered care packages to the soldiers. I couldn’t believe how appreciative they were. In the middle of our visit they spontaneously broke out in dancing. They specifically wanted us to say to everyone at home, “Am Yisrael Chai.”

I spent Shabbos in the town of Ariel, on the West Bank, that is home to some of our former Allentonians. The residents were so touched that our shul specifically sent a group in solidarity that they asked me to deliver the Shabbos morning sermon to talk about perspectives on the war from outside of Israel. The entire shul asked me to relay their thanks for supporting Israel during this time.

On Sunday, our shul arranged for a bus to take children from the south to have a fun-filled day in an amusement park in Yerushalayim, and with our funds, they also sent a children’s theater to the south. These initiatives both gave these children a full day of “non-bomb shelter” fun and give businesses in the south some needed customers. We did this together with the national Young Israel movement, and both the organizers from the south as well as the Young Israel leadership send their profound thanks to our shul for substantively helping these Southern residents.

Later that day we paid a shiva visit to the family of the young man who was killed in the tractor terror incident. It is difficult for me to adequately describe the emotions that were felt at the shiva house when I told them that our shul was visiting Israel for the specific purpose of showing solidarity at this time. This family is deeply Chassidic without much connection to American society, yet, they pleaded with me to tell our shul that even though our communities may be quite different – that is only on the outside, but internally we are all one – and they thanked us greatly for this tremendous show of unity and love. Sadly, this family now has five orphans and one widow – needless to say – our shul assisted as we could in establishing a fund for both the family’s short and long term needs.

We then visited the Nachal Chareidi army base outside of Yerushalayim. This unit is comprised of chareidim who are serving in the military helping to protect our country. Once again, the soldiers were extremely touched to see the support all the way from Allentown, Pennsylvania. One of the soldiers specifically pulled me to the side and told me to ask everyone to continue sending letters to soldiers. He said that whenever he receives one of these letters it changes his day and gives him extra strength to carry on.

This trip has been transformative in many ways, and it is my hope that everyone in our shul senses the deep feelings of love, thanks and unity shared by the people of Israel with our Allentown community.

May we only grow in our connection with the people of Israel, and may the current ceasefire turn into a time of ever-lasting peace and tranquility for the nation of Israel and Jews the world over.