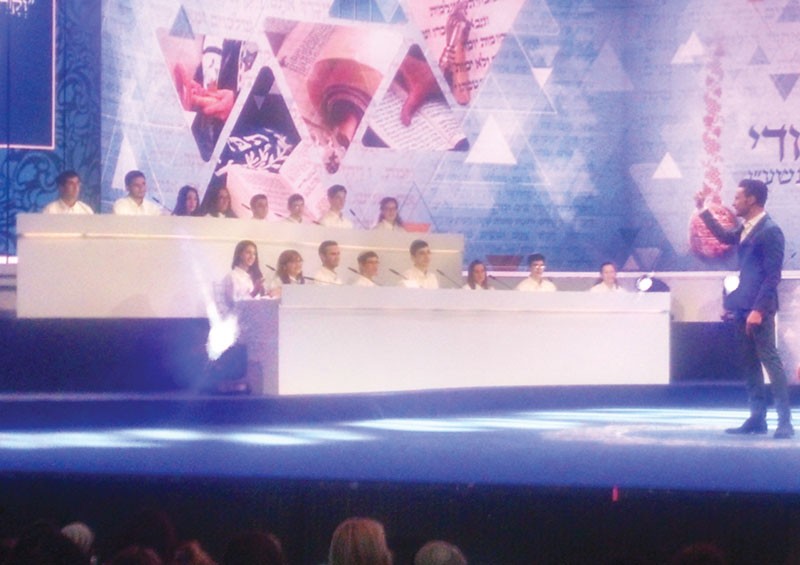 In the Jerusalem Theatre on Israeli Independence Day, contestants from around the world gathered for the final round of the Chidon HaTanach competition.

Noah Notis, a graduate of the Jewish Day School of the Lehigh Valley and a senior at Kohelet Yeshiva High School in Philadelphia, having taken first place in the high school division of the U.S. competition last year, was among them.

His parents, Mark and Alice, and his grandparents, Mike and Cooky, all of Allentown, and his sister and brother-in-law, who live in Israel, were inside the theater cheering him on.

“We were in the audience screaming like a bunch of crazy people from Pennsylvania,” his mother Alice said.

The competition, run like a game show, aired live on Israeli TV and livestreamed all over the world. Attendants included Natan Sharansky, chairman of the executive of the Jewish Agency for Israel, Minister of Education Naftali Bennett and Prime Minister Benjamin Netanyahu.

The contest, sponsored by the Jewish Agency for Israel and the Ministry of Education, tests students on the details of Biblical narrative and poetry. Most of the students take the exams in Hebrew.

Noah arrived in Israel two weeks prior among a group of 65 contestants from 33 countries. Through a preliminary test, the group was whittled down until the top 16 took the stage for the live show.

Noah not only made the live show, but placed fifth in the world. The best part of the experience, though, he said, was spending time with the finalists.

It was Noah’s experience at the Jewish Day School that built his confidence and inspired his studies, his mom said.

“He got the basis for any future study that he could have from the day school and its warm, nurturing environment,” Alice said.

The students at JDS were celebrating with him every step of the way, said Amy Golding, interim head of school. They were kept apprised of his status in the competition and the middle school students will soon be watching the whole show on YouTube.

“We are beyond thrilled to have a student reach this milestone,” Golding said. “We celebrate not only with the Notises, but for all of the graduates of the Jewish Day School and use this moment in time to inspire the next generation of students.”