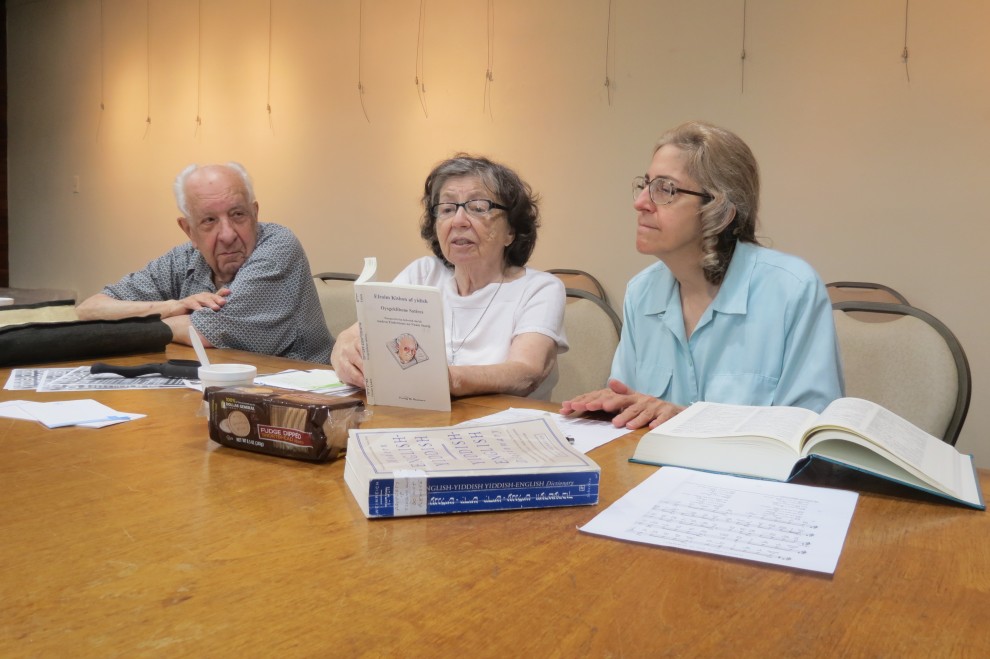 Thanks to Yiddish Club, I was able to greet my grandmother with “Ich hab dir lieb” (I love you), speaking Yiddish to her for the first time in my life.

The club, which has existed for over 20 years, meets in the board room at the Jewish Community Center of the Lehigh Valley on Tuesdays at 2 p.m. Its purpose is twofold: to provide opportunities for making new friends and staying mentally active, and to recall a once-flourishing language not known by many people today.

Murray Bonfeld, who has been a member for five years, joined because “it’s important to keep the language alive.”
“Before World War II, Yiddish was the language of Jews around the world,” added Janis Mikofsky, a member of the club for five years. “Then, half of the Yiddish-speaking population died” in the Holocaust, making groups like Yiddish Club crucial to preserving the language. “We’re a tiny part of how it’s coming back,” she said, also noting the importance of performances and college classes in Yiddish.

Each member has gone on a unique journey to get to where they are in terms of language comprehension. Hank Cedar and several other members recalled how their parents used Yiddish as a secret language in the home, if they didn’t want their children to know what they were talking about. He and Mikofsky, who grew up with a similar situation, always wanted to learn Yiddish, and the club was an ideal setting.

Other members like Chet Ringel, who has been a member for 15 years, recall learning Yiddish in childhood. He joined the club for the “nostalgia for what existed when we were kids” and the language was more prevalent.
Anna Figlin, who also learned Yiddish in childhood, explained, “When I was younger, before World War II, people would come over from Germany,” and her mother would take the new immigrants shopping to help them learn English. Living in New York City meant plenty of access to Yiddish stores on Park, 3rd, and 2nd Avenues. “I feel very comfortable with Yiddish,” Figlin said, adding that she has always enjoyed reading stories from authors who wrote in Yiddish originally.

During meetings, Yiddish Club members read poems aloud, sing songs, and translate stories from Yiddish to English. On July 11, for example, Mikofsky brought a book called “Onions and Cucumbers and Plums,” edited and translated by Sarah Zweig Betsky, and selected a poem by famous Yiddish poet Itzik Manger to share with the group. The poem, entitled “The Binding of Isaac,” explores the Biblical moment through a dialogue between the father and son. Club members went around the table reading lines aloud, commenting on the translation and looking up unfamiliar words in English-Yiddish dictionaries.

After the read-aloud and a short discussion of the poem, Mikofsky went to the auditorium with Paula Kaufman to practice a new song to bring to the group. The song was called “Should I be a Rabbi?” and focused on someone rejecting a variety of career options. Kaufman played the piano as Mikofsky learned the tune, and together they taught the song to the rest of the group.

After the song, other members brought out their materials. Ringel had a copy of Pakn Treger, the magazine of the Yiddish Book Center, a nonprofit focused on preserving Yiddish as a part of Jewish identity. Another member brought up www.yivo.org, the website of the YIVO Institute for Jewish Research, another resource for Yiddish texts. Kaufman had a book of short stories, and she soon chose one to share with the group. As she read the story, she paused to translate, and members debated the meanings of words and phrases.

Although the main focus of the club is the language, members of Yiddish Club also enjoy time to talk before, during and after the meetings. They are also preparing to make some new friends at Country Meadows of Allentown as part of an event sponsored by the JCC and Jewish Family Service of the Lehigh Valley. For this event, “Yiddish Club on the Road,” members will travel to Country Meadows to bring the club to people who have a harder time with transportation.

For more information about this event, contact Amy Sams at 610-435-3571 ext. 182 or asams@lvjcc.com. RSVPs are not necessary for weekly meetings, and whether you’re a Yiddish pro or want to learn something new, the friendly members of Yiddish Club always welcome new members