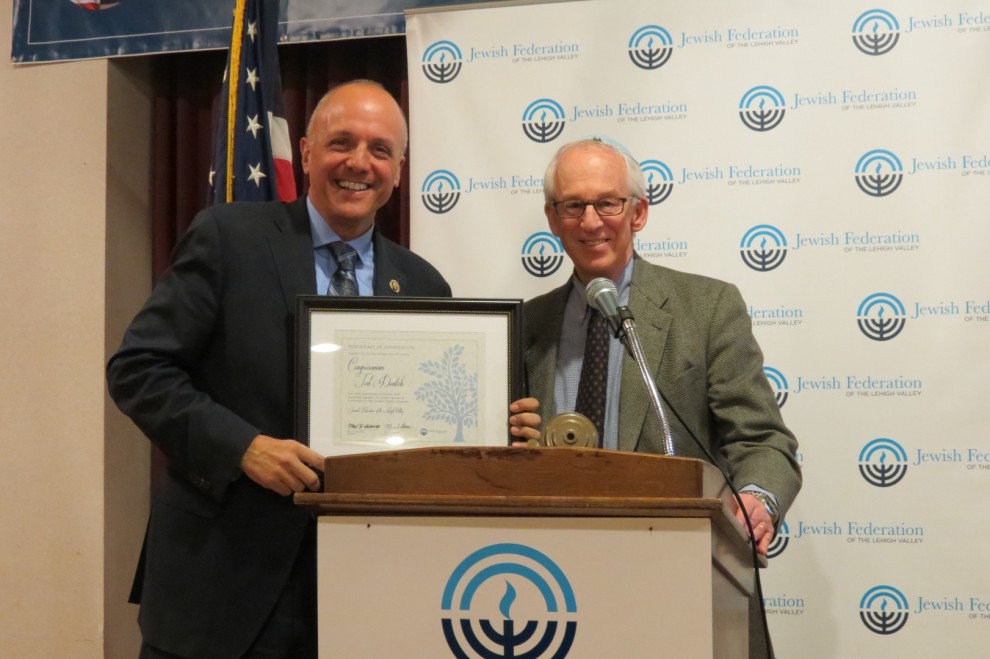 Despite the large crowd gathered to hear U.S. Rep. Ted Deutch’s speech at the Jewish Federation of the Lehigh Valley’s donor appreciation night on Nov. 16, his comments were of a personal nature. Deutch hails from Bethlehem and this was his first time speaking in the Lehigh Valley as a U.S. Congressman representing Florida’s 21st district.

It was Deutch’s high school experience that introduced the theme of unity, to which he returned again and again during the evening. At Liberty High School, he said, “I was the pro-Israel community.”

“At Brith Sholom, at home, at BBYO and Camp Ramah, I learned that we are responsible to look out for one another,” he said.

Deutch carries this message with him wherever he goes. The ranking Democrat on the Middle East and North Africa Subcommittee of the House Foreign Affairs Committee, he was in Israel this summer at the time the bodies of the three slain Israeli boys were discovered. He attended the funeral along with thousands of others, and then made a shivah call to the family of one of the teens, Nephtali Frankel, z”l .

While there, Deutch was asked to “talk to the Yeshiva boys.” And so in his “best Camp Ramah Hebrew,” he told the students that, “all during the captivity, during the time when the boys were missing, in every corner of the Jewish world, Jews all over the world were praying for the boys, holding vigils, that the entire Jewish community and members of Congress stood with them.”

Once engaged in the political process, it turns out that providing aid and comfort are only the beginning of what can be done.  As a state representative in Florida before making his bid for Congress, Deutch said there was not a lot of time spent on U.S.-Israel relations. He took matters into his own hands, scheduling a conference call with then-former Prime Minister Benjamin Netanyahu.

We “listened to [him] share his concerns about [what it] would be [to have] a nuclear-armed Iran,” Deutch said. “Florida went on to divest $1 billion from Iran and become the model in this country for that divestment.”

Before entering politics, Deutch was active with his local Federation. As a member of the National Young Leadership Cabinet, he even found himself bunking with several former Camp Ramah friends, including the Lehigh Valley’s Chuck Cohen. Alluding to the Federation model, Deutch said that today when he travels, he visits the Jewish community wherever he goes for what he called “mini-missions.”

On one such trip to Kyrgyzstan, he visited a Chesed Center entirely funded by the American Jewish Joint Distribution Committee, a Federation beneficiary. The woman who runs the program showed him “the young kids in their nursery school and then the older kids in their program on Israel. Then she showed us the cards to supplement the very meager groceries for the older people.”

“When we left,” Deutch recalled, “our security guard turned to us and said, ‘I really want to thank you … I never experienced anything like this, that on the opposite side of the globe there are people whose lives are better because of funds from people on the other side of the world who do not ever even get to meet them.”

Deutch’s story becomes all the more poignant in light of the fact that, several generations back, his own family came from Eastern Europe, although those who stayed behind did not survive World War II. Today, Deutch is very active in ensuring the needs of Holocaust survivors are met and that the reparation commitments to them by the German government are maintained.

So while he and his colleagues – including U.S. Rep. Charlie Dent who was in the audience and whom Deutch praised as “sensible in thought and rational in approach” – work to reinforce the “unbreakable” bond between the U.S. and Israel, Deutch said it is the vocal and active Jewish community working through the Federation and other organizations that complement efforts at home and abroad.

With his mother, Jean, and his siblings Elaine and Stan in the audience, and all of his listeners rapt, Deutch closed by saying, “My family instilled in me the fervent belief that you can go anywhere in life, including the United States Congress, but you must never forget where you came from.”

MORE FROM THE 60 DAY CHALLENGE RECEPTION:

VIDEO: Rep. Deutch on the Federation's impact around the world

VIDEO: Rep. Deutch on the importance of an organized Jewish community