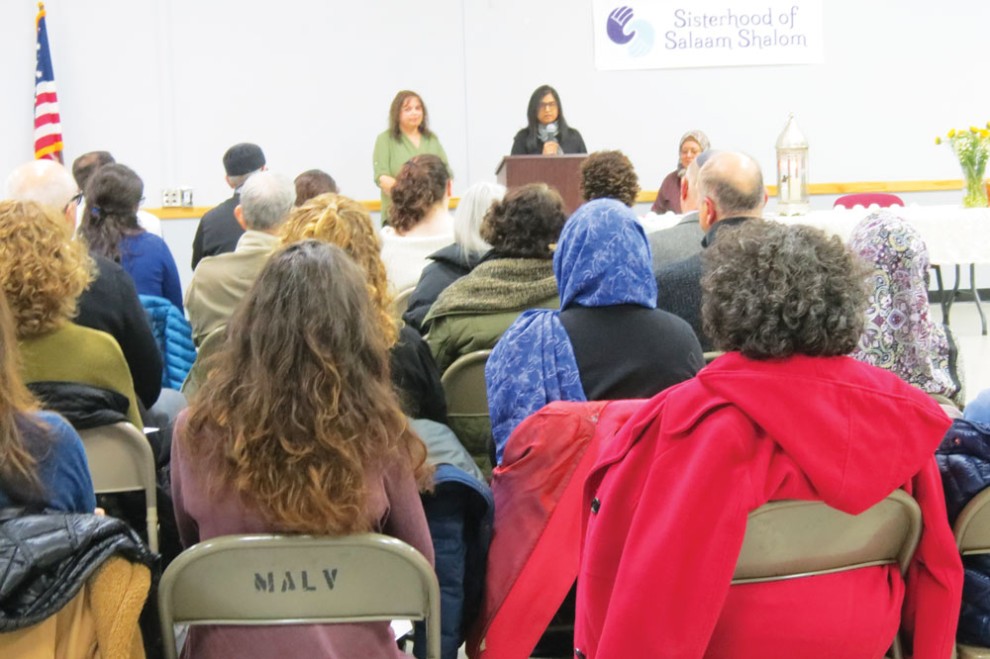 With candles in their hands, they stood together as sisters. Muslim and Jewish women, joining in prayer, to say no more hate.

On Jan. 15, the local chapter of the Sisterhood of Salaam Shalom, a grassroots organization in the U.S. and Canada dedicated to fighting hate against Jews and Muslims, held a Unity Vigil at the Muslim Association of the Lehigh Valley.

Dozens of members of each community gathered to hear from community leaders and support each other.

“Through these relationships, we commit to work together to limit acts of anti-Muslim and anti-Jewish sentiment,” said Najma Khanani, co-leader of the Sisterhood. “To stand up to hate against one another and to engage in social work together.”

The Sisterhood has gotten together many times over the last few years for happy occasions: sharing Passover seders, iftar, cooking for the local rescue mission and performing other mitzvah projects.

“But there have also been too many gatherings that our agenda is put aside as we need to vent about the latest hate that has been directed toward one or both of our groups and left us shaken to the core,” co-leader Alicia Zahn said. “It is always a comfort to know our sisters have our backs.”

The idea for the vigil was borne out of a meeting in her living room just the week prior.

Imam Basheer Bilaal of the Muslim Association of the Lehigh Valley told the crowd it was an honor to host such a beautiful gathering.

“God tells us that we should find the commonalities in our faiths and we should unite in that which is good, standing for justice and peace,” he said.

“We the descendents of these two brothers, we are kin, we are cousins,” Schorr said. “Reaching back through our ancient and sacred texts, we see that our stories are intertwined from the very beginning.”

“Tonight we too come together, the children of Ishmael and the children of Isaac, to acknowledge the intolerance and violence against us, not due to anything we have done, but for the sole reason that we are different,” Schorr said.

Lehigh County Sheriff Joe Hanna then spoke about the laws surrounding bias and hate crimes in Pennsylvania and what to do if you feel you or someone you know is a victim of a hate crime.

“We live in an angry world, and it just seems to get angrier every day. And that equates to us living in a dangerous world,” Hanna said.

So we have to look out for ourselves and one another, he said.

“I’m speaking to the choir here because there is a unification, there is a unity here, and there’s strength in numbers,” he said.