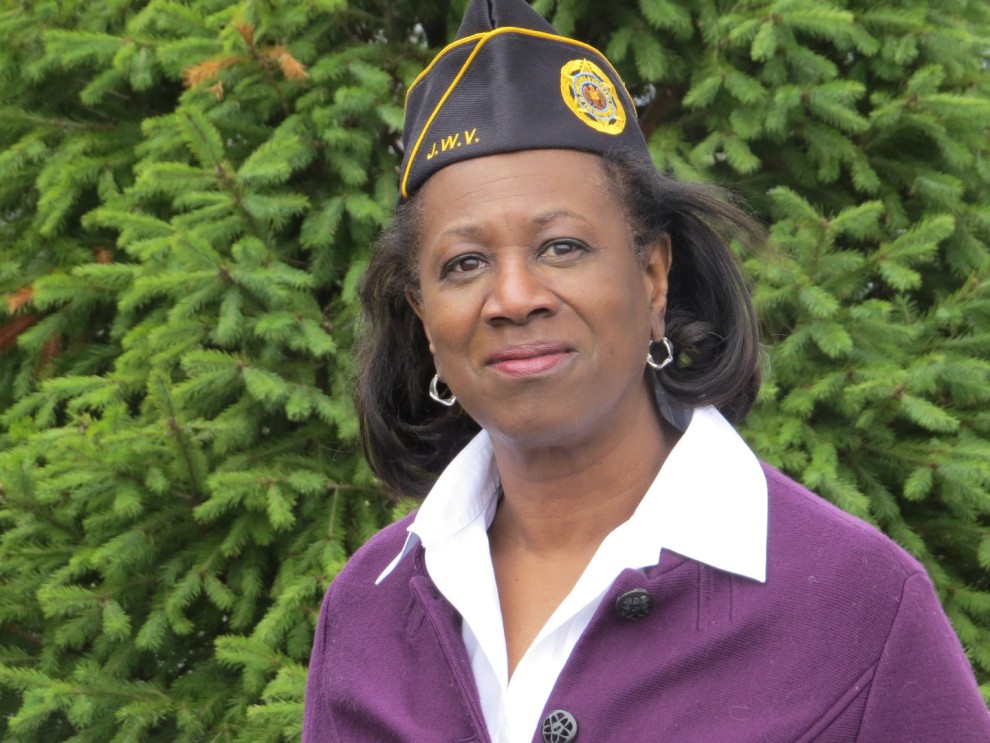 The Jewish War Veterans have a dynamic new Commander, retired senior master sergeant Sheila Berg. Originally from Westbury, Long Island, Berg joined the United States Air Force reserves because she wanted to serve our country and sought a challenge. She found it.

It would have been easy for Berg to enlist in the army, because her father had spent his career in the army and had found a position for her. But Berg, who at the time already had a college degree and a master’s degree in social work, sat for the military entrance exam and chose the Air Force. The exam gauges candidates’ abilities in four areas and Berg made it her personal challenge to pursue the one in which her score had been lowest – mechanical.

This wasn’t her only mission: “I was older than everybody else at basic training but still had to keep up with everyone else,” but she easily outran some of the 18-year-olds. To become a mechanic, one of the requirements was to be able, in one motion, to lift 60 pounds over her head and carry her own 40- to 50-pound toolbox. Did we mention that she was the only female in the post-basic training Jet Engine Mechanic Class.

“I didn’t fit the mold,” Berg said. However, she enjoyed both the classroom and shop technical training and eventually won over her classmates. “By the end, we were all friends,” she said. “We helped one another so everyone in our class graduated.”

Of the planes she worked on as a mechanic, Berg said, “My favorite is the C-5. It’s the largest cargo plane and can hold eight buses. My next favorite is the C-130 because it backs up. You have to be a mechanic to understand.” She also got to know a lot of people she ordinarily would never even have gotten to meet. Keep in mind, all of this was Berg’s job one weekend per month as well as two weeks per year. The rest of the time, she continued in her career as a clinical social worker.

After 14 years as a jet engine mechanic, Berg became 1st Non-Commissioned Officer in Charge (NCOIC) of Family Readiness for the Reserves at Dover Air Force Base. This meant that after working a full week, Berg would make the drive on Friday to Dover, Delaware. The position was created in response to cases of family problems or of children of single parents being left alone. At first, the Wing Commander did not see the benefit of the program, although Berg and her colleagues helped to overcome that obstacle and the program is now well-supported.

Berg followed that up with two years as 1st Sergeant in the Personnel Administration Squadron, an “additional duty job” to which she was appointed and in which she represented the enlisted people to the commander and held disciplinary duties.

Berg became the superintendent of the non-flying personnel in a flying squadron. One day, she walked into her office on the base and found everyone looking stunned. “There’s been a crash,” someone explained. One of the planes had crashed at Dover.

“Thank God, everyone survived,” Berg said. However, the crew in the front of the plane were injured and had to be taken to the nearby trauma center. Berg and her team jumped into action, engaging in triage and supporting those injured and their families. During the weeks that followed, she found it helped to be a licensed clinical social worker.

In another first, Berg was assigned as the first reserve 1st Sergeant  to the mortuary at Dover Air Force Base, to which the remains of soldiers of all branches of service are flown from overseas for burial preparation. Those who work in the morgue, she said, “do have the greatest respect. I tried to make them aware of Jewish concerns when there were Jewish kids [fallen soldiers] coming through, to have somebody with the body and to contact a rabbi.”

The respect for religious freedom and the other freedoms we hold dear in our country continued to motivate Berg throughout her 29 ½ years of military service. “In this country, Jews can celebrate and not have to worry about persecution,” she said.

For Berg, serving in the military made it at times challenging to keep kosher, especially when she was required to attend official functions. During Operation Iraqi Freedom, Berg was called up to active duty and for three and a half years was required to live by Dover Air Force Base. She attends Congregation Sons of Israel in Allentown and is active in the Jewish Federation of the Lehigh Valley, so she joined a synagogue near the base and volunteered through the course of her residency.

Berg’s son, Jordan, was in college at the time of the Iraq War call up. However, while he was still a student at the Jewish Day School, he had to endure an 18-month separation when Berg was called up during the Gulf War.

Berg retired from the Air Force in 2009 yet remains very active. In addition to her new position with the JWV, she is president of the United War Veterans of Wars of Lehigh County, the umbrella organization for the various veteran units and host to the annual Memorial Day ceremony held in Allentown and a board member of the Lehigh County Meals on Wheels.

This year, the veterans are inviting the junior ROTC of Allen High as color guard. “I think it’s important to mentor young people,” she said. “Maybe they’ll see the benefit of serving our country.”

Such outreach is only the beginning. “Veterans from all campaigns share a common bond that should be supported and [their] benefits protected,” Berg said. The challenge in the coming year is to engage new members with different perspectives, and Sheila Berg loves a challenge.