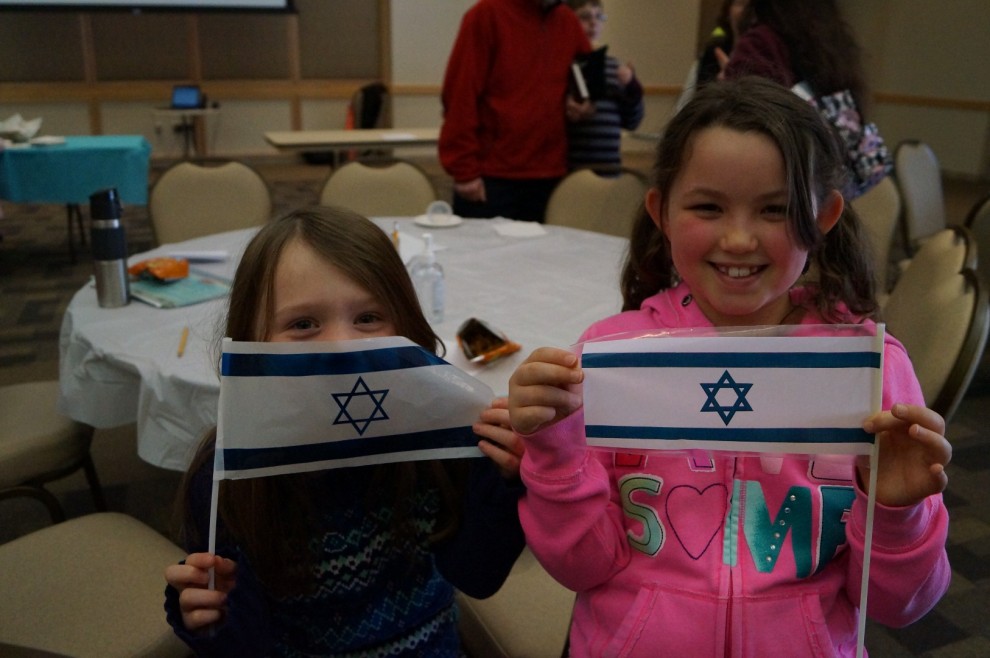 One moon that looks the same to people all over the globe. That moon has become the basis of a new project shared between the Lehigh Valley and the region of Yoav, Israel, through Partnership2Gether.

The Same Moon project, also now a book, was the brainchild in 2012 of Adi Shacham, an Israeli shlicha working with the Jewish Federation of Greater Indianapolis.  Shacham’s goal was to find a way for families to learn that despite distance, the worlds of Israeli and United States families are very similar. Through shared experiences, “The Same Moon” brought families from Indianapolis and from their partner area in the Western Galilee in Israel closer together and fostered greater knowledge and understanding of how Jewish families in different parts of the world live their lives.

Shacham, who developed the idea, worked with students to create the book to serve as a guide for those shared family experiences. The book, co-authored by Shacham and Patti Freeman Dorson, is illustrated by Indianapolis artist and associate of the Partnership2Gether program, Joani Rothenberg.

Because the project was such a success in Indianapolis, it has been expanded to other communities. Now children in the Lehigh Valley will get to participate in the program along with children from Yoav. The project requires families to make a six-month commitment.  With the help of their parents, nine children from Temple Beth El’s second grade will write monthly letters to their pen pals. “The Same Moon” books are available in both English and Hebrew, but all letters will be written in English. There were many more third graders than that in the three elementary schools in Yoav, so the children and families participating from there were hand-picked.  The most committed, engaged and excited students were chosen by the Israeli teachers involved.  There will be both a classroom component and a home component to this partnership both here and in Israel.

In Israel, it is the third graders who have been paired with our second graders, because the Yoav children begin learning English in third grade.  At Beth El, second grade is the grade during which the children really start learning to read and recognize vocabulary in Hebrew.

Parents and children gathered at Temple Beth El on Sunday, Feb. 23, for a special introduction to the program. “I do know that all of my students and I are extremely excited about getting pen pals in Israel,” said Diane Stein, the second grade teacher at Temple Beth El who, along with co-teacher Elaine Langer, will be organizing this first group of students to participate.

Communication will be done via regular mail.  The emphasis for the project is family participation and written correspondence.  In an electronic era, the excitement of receiving something in the mail remains unabated. “The Same Moon” book includes envelopes into which families will place the letters, pictures and any other momentos that their “across the ocean” family may share.

The colorfully illustrated book provides information and commentary to assist the families in preparing their letters and in appreciating the concept of being apart yet being similar. The use of both Hebrew and English further underscores the concept. In the months ahead, families will share holiday customs, leisure activities, weather comparisons and ways that they relate with the rest of society. In learning about others, families are sure to learn more about themselves and what it is like to share “The Same Moon.”

Adapted from a similar article written by Mark Kirchhoff for The Jewish Press published by the Jewish Federation of Omaha.