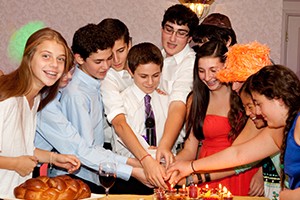 Joining a synagogue was always in the back of Lauri Franko’s mind when she moved to the Lehigh Valley in 2006. But life happens; she was busy starting a new job and enrolling the two youngest of her four children in daycare. When she visited one or two synagogues and didn’t find what she was looking for, she didn’t pursue it.

“My parents raised me as an Orthodox Jew in a Conservative synagogue,” said Franko, whose life changes facilitated her drift away from organized Jewish life. But when her son Nick turned 13, she reconnected with her strong need to raise all her children Jewish and for her son to have a bar mitzvah. She visited Congregation Brith Sholom in Bethlehem and soon joined. The family remains happily engaged.

It isn’t always a lifecycle event that helps people connect. For 20 years, Scott Berman had been unaffiliated because, he said, “I wasn’t sure where I fit in in terms of my very liberal philosophy and in terms of being an interfaith couple.”

Then one year, Berman attended a community Passover seder at the Jewish Community Center (JCC) and met Rabbi Melissa Klein, then of Congregation Am Haskalah. “She said, ‘Come join us because Am Haskalah is open to everyone,’” Berman recalled.

“I was impressed by how warm and friendly everyone was,” he said. Berman joined and is now co-president.

For Susan Wild, it was when son Clay neared preschool age that she took the first steps. “As I started to research our options, I learned of the JCC and the educational programs that were offered, from preschool on,” Wild said.

“Once we were tuned into the existence of the JCC, and after our one-child family became a two-child family with the addition of Addie, now 18, we really started to focus on moving to an area that was closer to the JCC and where our children would be raised among other Jewish children.”

At Clay’s urging, the family joined Congregation Keneseth Israel and, today, community is integral to their lives. Wild now serves on the Jewish Federation board and is active on its Community Relations Council.