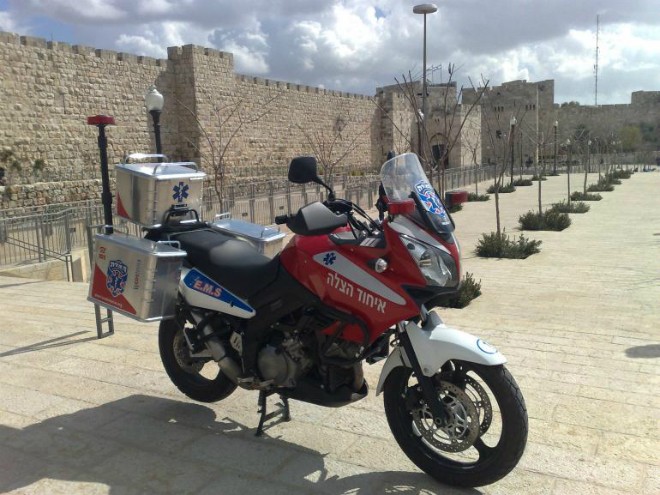 The streets of Jerusalem were crammed with commuters on their way home that day when the call came in. A 6-year-old who suffers from a chronic lung condition was having an asthma attack.

In 65 seconds, the first ambucycle arrived on the scene. About 20 seconds later, another pulled up. The two volunteer drivers performed CPR on the child and saved his life.

“Can you imagine if they waited another two minutes even?” said Eli Beer, founder of United Hatzalah, which operates the ambucycle program. “You hear of lots of children who died from this or that and they could have been saved if someone had gotten there 30 seconds earlier or a minute earlier.”

United Hatzalah volunteers currently operate 450 ambucycles on Israel’s crowded streets. These sleek, easy-to-maneuver vehicles are packed with every piece of equipment found in a typical ambulance, minus a stretcher.

To celebrate its 30th anniversary this year, the Maimonides Society of the Jewish Federation of the Lehigh Valley is raising funds to purchase and equip an ambucycle. The group will be paired with a volunteer driver, and learn how the volunteer and his vehicle make a difference every day.

“This fits, in my view, into the goal that the Maimonides Society has had from the beginning of doing good in the medical arena for others,” said Dr. Larry Levitt, one of the society’s founders. “It doesn’t get better than saving lives in Israel with funds raised here.”

“We wanted to have something tangible to show for our efforts and our hard work and show how proud we are of our 30 years of existence,” said Dr. Marc Berson, co-chair of the gala. “To have this actual physical piece of equipment actually on the road saving lives is a great representation of what we’re all about.”

Especially with the recent violence in Israel, the ability for first-responders to reach a scene quickly is critical, Beer said.

“If you want to get there in the first two or three minutes, you can’t do it with an ambulance because of the traffic, congestion and everything going on in Israel,” he said. The ambucycles are “easy to maneuver in between cars, on the sidewalks and never have problems with parking.”

“Every single attack, the first ones to get there were the ambucycles,” he said.

The volunteers take the ambucycles home, to work, and everywhere they go so they are always ready to jump on or change course in a moment’s notice. When alerts come in, a smartphone app will tell the drivers how far they are from the scene.

“The whole idea of United Hatzalah is all volunteers,” Beer said. “Our volunteers get nothing in return. They even pay for their own gas.”

Sponsorships of the Maimonides Society’s 30th Anniversary Gala this June will go toward the cost of an ambucycle. To learn more about becoming a sponsor, visit www.jewishlehighvalley.org/gala30.

A reception for sponsors and Maimonides members will be held on Thursday, June 9, at 6 p.m. at the JCC of the Lehigh Valley with featured speaker Dr. Steve Klasko, president and CEO of Thomas Jefferson University and Jefferson Health and former Maimonides president. Dr. Klasko will also give a free lecture to the community beginning at 7:30 p.m. To learn more, click here.